Sir David Attenborough described the threat of global warming in an hour of primetime TV that opened the country’s eyes to climate change.

“Right now, we are facing our greatest threat in thousands of years: climate change.”

With those words, Sir David Attenborough introduced what many are saying was the most important hour in recent TV history. In it, Sir David, along with a host of eminent scientists and environmental experts from around the world, clearly sets out the facts about climate change, explaining the devastation global warming has had on the planet and the catastrophic future we face if nothing is done.

Like Blue Planet before it, Climate Change: The Facts aimed to galvanise the public into taking notice of the damage that’s being done to the planet. Over images of polar ice caps melting and wildlife on the brink of extinction, the alarming facts came thick and fast:

THE LUNGS OF THE PLANET

The programme goes on to focus on deforestation, which not only rids the world of vital trees that absorb over a third of the world’s CO2 emissions, but releases tonnes more CO2 into the atmosphere as the forests are burned to make way for pasture or palm oil.

“Forests are one of our ways out. They are the lungs of the planet.”

Now, instead of taking out a third of the CO2 in the world’s atmosphere, deforestation and the subsequent burning of trees creates over a third of the planet’s CO2 emissions. The message is clear: if deforestation and fossil fuel burning continues at the same rate, the planet’s temperature will rise further. While no one knows exactly what effect that will have on the world, scientists agree that global weather systems will change, which will have a devastating effect on sea levels, agriculture and the availability of fresh water.

“The future looks alarming, but it’s not without hope,”

says Sir David towards the end of the programme.

“There is still time if we act with determination and urgency.” 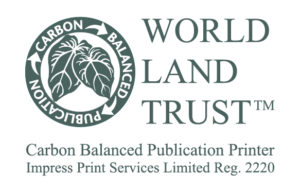 One of the global organisations fighting deforestation and working to preserve the world’s most important and biologically diverse habitats is World Land Trust. By funding the preservation of land, they provide permanent protection for habitats and wildlife, which would otherwise be lost forever.

One source of funds for the charity is from the Carbon Balanced scheme. This initiative encourages companies to use papers and printers that have had their carbon impact balanced by World Land Trust. So not only are the carbon emissions of these companies reduced, but they raise funds to help World Land Trust preserve the world’s most endangered habitats. Sir David Attenborough, who is one of the patrons of World Land Trust, says,

“The money that is given to World Land Trust has, in my opinion, more effect on the wild world than almost anything I can think of.”

If the effects of global warming are to be halted and the planet saved from catastrophe, individuals, governments and companies have to take more responsibility for their contributions to climate change. Using a Carbon Balanced Printer for your communications is a good first step.